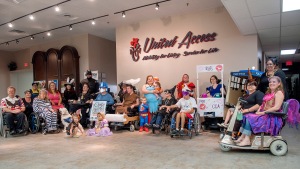 On October 24 Mike Shipka graciously opened up the doors to United Access in Carollton for an evening of fun, food, fellowship, candy, & more candy!! Everyone who went had a great time, and the 3rd annual Halloween costume contest was awesome! I am pretty sure it has been happening for 3 years now. I remember when Racquel Flores , Jason Roberts , and myself started it. I was totally bummed that I was not going to be able to make it this year. I am already planning next year’s costume so watch out!!

I got a hold of some pictures from that evening of the winners . I have to say they were all so good that I know what I was thinking would not have been able to beat them! Very talented and creative!

1st place went to Matt, Amber, Jasper Martin as they were the Flintstones! Making the car out of Matt’s chair was brilliant! Jasper was the cutest Bam Bam ever!! I like how Superman is acting all cool, calm, and collected like he belongs there in Bedrock, LOL! 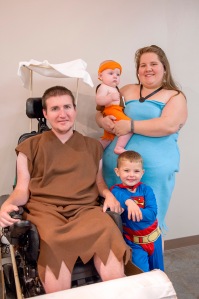 2nd place was Laura Halvorson, Ms. Wheelchair Texas 2014, as the TARDIS from Doctor Who. This was really really clever, but I must admit I did not know what exactly the costume was until she told me. 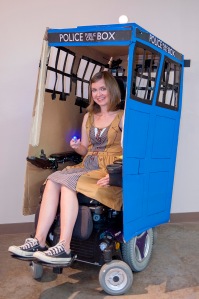 “Not many of the people knew what my costume was. I was “the police phone box” which made me giggle,” Laura said!

For those of you who do not know the Doctor Who is a British Sci Fi show that has been around for over 50 years. It’s not as popular in America as it is overseas.

Getting 3rd-place was Racquel Flores as the kissing booth for CCA!! This was great!! I liked all of the detail that was put into it.

Hey, hey did these people pay??? If not, they owe CCA some dough!! Both of those phrases rhymed, LOL!

Until next year, rolling on, Stephanie

Tell us what you think! Cancel reply

Thanks for visiting! Camp Craig Allen provides adaptive and therapeutic recreation programs that promote education and advocacy for people with physical disabilities. Check out our website and our "About Us" page for more info.