It was one of my favorite times of year again… The MD reunion camp! It was August 22-24 at the Collin County Adventure Camp in Anna Texas. With my dad on vacation I asked my aunt to come with me, as I knew I did not want to miss this one.  So off we went…

There was a definite void without Dawn there as she was in the hospital, but we all knew that she would not have been a “happy camper” if camp would have not gone on. She was in all of our heart’s with everything we did that weekend.

As I recap the happenings of the weekend I will try to give you a feeling that you were there for the first time, or maybe a remembrance of being there again. Pictures were not taken on Friday or Sunday, ugh, so I will do my best even though it would be easier with visuals.

As we waited patiently for the pizza to arrive all of us got acquainted with friends we had not seen in a while.  Also, meeting some new friends that were instantly joined into the Camp Craig Allen family! It was the first time that I got to meet the Camp Craig Allen nurse Danica! We could not believe that we had missed one another at camp. I guess when she came I did not and vice versa. She was gathering all of the health forms, and looking them over during this time. Pizza time was finally here, and I could smell the aroma! I was really hungry, and that pizza tasted as good as my mom’s home cooking! I think I had three slices which is way more than I normally eat! The cabin that we ate at was big, but with the furniture still in there along with our furniture (power and manual wheelchairs) we did not move around very much. So I got a chance to get to know Amber, one of the new campers, and her mother Catherine really well. They are so nice! I learned the cleverest idea from Amber that is too good not to share.  I know that Velcro is the best invention (besides duct tape!)! She had put Velcro on the arm of her wheelchair, and then put some on the bottom of her phone so that it would stay stationary while she was using it! Genius I tell you! I am so using that one!! Then we all rolled and walked down to the fire pit. We went around and introduced ourselves and told a little about us. Then it was s’mores time!! I am sounding like I never get feed, but that hit the spot! S’mores around the campfire are the best! We all needed to get our rest on so we hit the hay for we knew that Saturday was going to be a hot long day full of activities!

Breakfast came early, and I will have you know that my roomies and I were one of the first people there! As I looked out the window, I saw Minis and Friends! That’s right Minis and Friends of North Texas came to spread the love of their miniature horses. Many thanks go out to Sharon Fuller, her crew, and her lovely minis! 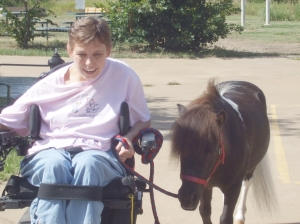 I am rolling with a Mini!  That could be a song title, I will work on that!!

Lonnie was guiding a Mini around the obstacle course! 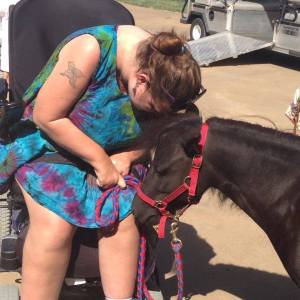 Charlie is so sweet that this Mini could not quit licking her leg!

I really do like your scarf Michelle! This Mini sure was getting lots of love! They are all adorable!

When guiding them through the course it is weird to look to your side, and see that you are taller then they are. I bet that is what Arion was thinking. 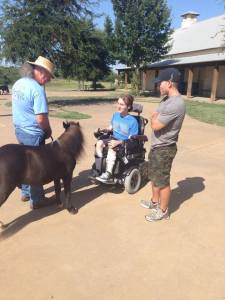 This was the first time that camper Steven and his friend Nate came. They were both a lot of fun to hang out with. Looked as though they were getting educated about the Minis.

Then some went fishing while others (this included me) went to the education building  to hang out and stay cool. 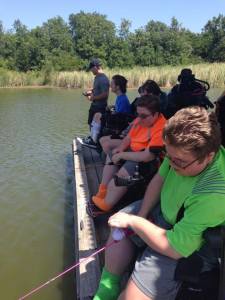 It was sure hot, but they all enjoyed themselves! 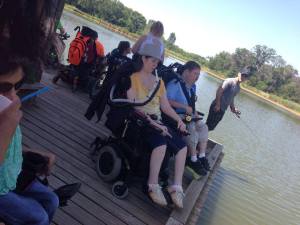 The Fishing Queen, Racquel Flores was there to make sure that she kept her title. And she did!

“EEEWWW! Don’t do it Clint,” shouted Clint’s new bride Kimberly. Okay so I put words in her mouth, but that is what I would have shouted if I was her! LOL

After enjoying some visiting/fishing time we had lunch in the education building. We needed to get our appetite built back up to play Boccia and Wheelchair Hockey. We used 2 separate rooms to play so that we could have lots of space to play. I was excited to get to play Boccia again!

I am not falling over, that is how I roll the ball! This is what I like about this game, you can use whatever way you feel necessary to get the ball to where it needs to go.  I would roll the ball, Amber (girl to my left) used a ramp to put the ball in, and Jeremy (guy to my right) would toss his ball in the air using his wrist. No matter your limitation or strength where there is a will there is definitely a way to play!  We played 3 to a team. We were the red team, and I am not ashamed to say that we did not win, however I had a blast!  We played three different games, and there were all really close.

Positioning the ramp so that the ball would roll right was tricky and made it not the most independent to use. Until Clint who was helping the other team in managing their ramp got the bright idea to use the trashcan under it. I knew it was good for more than just holding trash, LOL! It worked out great! Even though we were all competitive and strategic we showed nothing but love!

They sure do have a lot of their blue balls left to throw!

Now it is on to the ever so fast paced game of wheelchair hockey!

Even though Charlie forgot to bring her personal hockey stick she was still an awesome contender!!

I think they were doing a little tag teaming!

I can’t tell if they are in a team huddle or playing a game of musical chairs, LOL!

It is now time to go get changed to go swimming!

The only picture I have of us during pool time was our attempt at a group picture. Group pictures are always funny because we catch people who are just coming in to the pool area so they hurry to get in the picture. It probably took a good 15 min. or so to try and get everyone in. It is a good picture though. Some were already in the pool so they just stayed in there.

Mike Shipka with United Access grilled hamburgers and hotdogs for us by the pool!! I did not want to get out of the pool, but the smell of the grill made things very tempting! Thank you Mike!

As I said before, it was hard for me to get out of the pool as it felt so refreshing! It is not very often at all that I get to go swimming. It is so freeing to be able to get out of my wheelchair. With that being said I was one of the last ones to be helped out to go eat.  Through a series of events that came next (saying long goodbyes, van not starting, and changing out of wet clothes) we did not make it to the dining hall for the mystery theater that Jason Roberts was doing, Ugh.. When we got to the dining hall we thought about going in and yelling that we were the mystery, LOL! But as we got in there they had already started so we just sat to the side and watched. This gave my aunt a good opportunity to take some pictures. 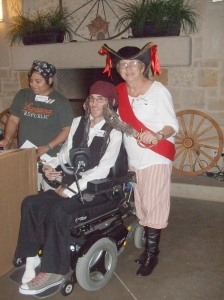 Many kudos and major props go out to Jason and Phyllis Robert’s for putting on such a detailed activity that all enjoyed! I did not know the storyline, but I knew that everyone had to guess “Who did it?” In my observation of everything, I found it awesome how much thought and detail went into this activity.  Everyone had pirate bandannas to wear!  They even presented us with little goodie bags for everyone (including me)! Stuff like a pencil, a pirate eye mask, a stick on tattoo and more!! My favorite thing from the goodie bag was a Ziploc snack bag of this caramel party mix! Apparently, this was also my Aunts fave as she kept it from me for a whole week before sharing, LOL! She told me she would eat a little each day before she felt guilty for not sharing it, LOL! It cracked me up, but I totally understand why she did it because it is so good! I got connections though and got the recipe from Jason!  Thank you, Jason, and Phyllis for putting this activity on! It was a success, and the main reason why you Jason are the Activities Coordinator for camp! 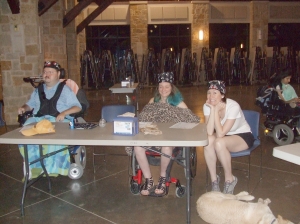 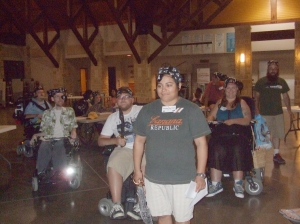 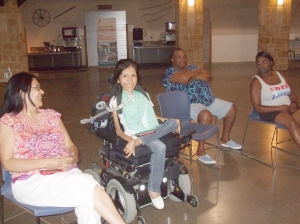 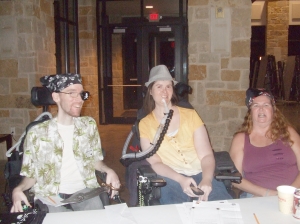 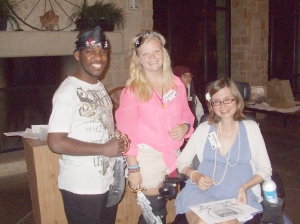 So who do you think did it? Leave a comment on this post as to who you think did it? My guess would be Mike Shipka, from that picture he looks like he is a man on the edge! Don’t give him any weapons, LOL! You know I love you Mike!

We had to get one last group picture before we headed again to the fire pit! We enjoyed the late-night snack of smore’s, and then headed for bed as we were all exhausted from the day’s activities! I don’t think I moved much in bed that is how tired I was.

Breakfast came early even though we got to sleep in for an extra hour! We started gathering our belongings before heading to the dining hall. That is the saddest part of camp, leaving. As we began to eat we were serenaded with worship music by Miles Shaffer! As we finished eating we were given a wonderful message from Arion Wade! Thank you both for doing what you do best!

Homeward bound it was from there. It was a wonderful weekend full of wonderful memories!

Sorry, got carried away for the moment. I am always singing the theme song to the show “the Jefferson’s” when I hear that the North side for the North Texas Wheelchair Hockey League is going to be having practice, LOL!

For more info and to SIGN UP go to http://campcraigallen.org/wheelchairhockey/

The NTWHL will have 4 divisions, based on varying levels of physical ability and mobility equipment. This league is for people who use a manual or power wheelchair for mobility. All players must have the ability to understand the program activities and full instruction. Participants will include those living with the most severe limited range of motion and less physical functionality, to those of persons with high-functioning upper body strength.

If you have not yet made a practice before I highly encourage you to do so! It is a lot of fun! 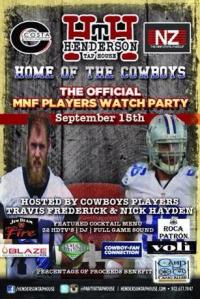 It’s a Monday Night Football watch party with Dallas Cowboys players Travis Fredrick and Nick Hayden on September 15th.  How often is it that we get the hang out with Celebs? Me, never! 15% of drink sells and food go to Camp Craig Allen! Travis Fredrick will be willing to do some Photo ops and autographs for Camp Craig Allen supporters.

Thank you to Costa Sports Marketing for getting this together!

Thanks for visiting! Camp Craig Allen provides adaptive and therapeutic recreation programs that promote education and advocacy for people with physical disabilities. Check out our website and our "About Us" page for more info.